Rhubarb (a.k.a. raparperi) is something I only discovered upon moving to Finland. It intrigues me because it is not quite a fruit, but not really a vegetable either.  It’s used mostly in desserts, or at least so far that I’ve encountered, paired with other fruits, such as strawberries, and has been featured in anything from pies to kisseli. In any case, it’s usually local produce (or at least domestic produce) and seasonally available in the later part of the summer.  I decided to make a new recipe with rhubarb, that is similar to lemon meringue pie, an American favorite. Since rhubarb is rather tart, it can replace lemon juice in this recipe if given the right proportions, so I gave this a try. 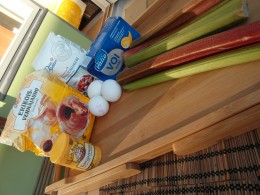 Start with your ingredients:

You will also need: a mixing bowl, a baking dish (round, square- doesn’t matter), and a rolling pin for the dough

Start with the crust: this is easy. Preheat the oven to 190 C. Take your butter, cold from the refrigerator, and cut it into cubes. Mix in the flour and a pinch of salt and use your hands to mix the butter and flour together. After breaking up the lumps of butter in the flour, you will end up with a mixture of coarse crumbs, as seen in the picture below. If this takes a while for you, you may want to stick it back into the refrigerator to let the butter firm up again. This ensures that the crust is flaky and beautiful when you have finished baking, because there will be tiny pockets of butter. 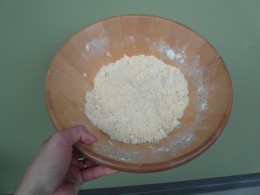 The flour mixture now looks like bread crumbs of some sort. At this point you add table spoonfuls of very cold water, one at a time, mixing well (again, with your hands) until it is just holding together. You may need about 3 table spoons (rkl) of cold water or more, depending on your flour. When the mixture holds nicely into one ball, but is not sticky, you have it at the perfect consistency. 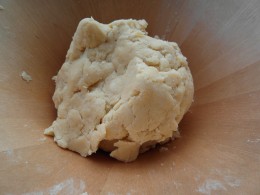 Once you have achieved this, you will need to get out your rolling pin. You can either do this on a clean counter surface that’s been lightly sprinkled with flour or a piece of parchment paper. Place the dough in the middle, flatten a bit with your hand, and then roll out from the center in the shape of your baking dish. 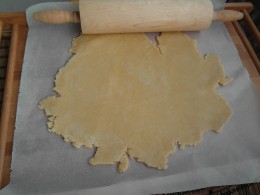 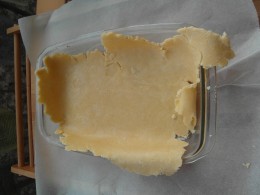 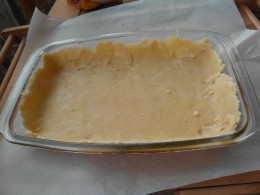 Don’t worry if there are cracks in the side or it isn’t the perfect shape, as you can easily break pieces off around the edges to mend together. The only important thing is that there are no noticeable cracks in the bottom of the dish, or the liquid filling may leak through during baking.

Bake the crust by itself for 10 minutes until slightly golden. Do not overbake because this will be going back into the oven later.

While the crust is in the oven, prepare the filling. Separate the 3 eggs- by this I mean, egg yolks (keltaiset) and egg whites should be separated. This is not hard to do, just crack the eggs open on a hard edge, and open with the yolk 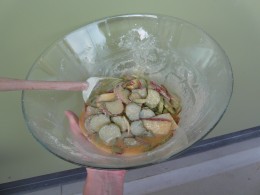 in one half of the egg shell and the white in the other half. Slide the yolk back and forth carefully between the two halves of the egg shell, letting the whites fall into a bowl. Place the yolks in another bowl. If any of the yolks get into the whites, the whites will not whip properly later on, but I’ll get there in a moment. Leave the egg whites out in room temperature. Add the egg yolks to a large bowl. Cut the rhubarb into slices and add them, the cream, 2,5 dl of sugar (saving 1 dl for later), vanilla sugar and a pinch of salt.

Add this mixture to the baked pie crust and return the pie to the oven for 55 minutes. This will allow the egg yolks to set and the whole mixture to firm together. This mixture is known in a lot of pies and puddings to be ‘custard’ because it is based on egg yolks.

While the pie is baking, prepare the meringue top. With a whisk or a hand mixer beat the egg whites quickly, adding a tablespoon of the reserved sugar at a time until the egg whites have formed stiff peaks. Do not under- beat. Once the pie is out from the oven, top the pie with the whipped egg whites, using the back of your spoon to create peaks. Return to the oven for another 10 minutes, or until parts of the egg whites are browned lightly.

Allow to cool for a while before serving, serve room temperature or chilled. 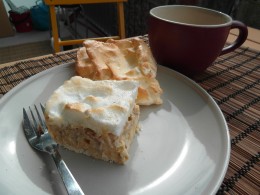