I just returned from the USA on a month long holiday with fantastic seafood and local specialties that I’ve been missing since being in Helsinki. My holiday was perfectly timed and aligned with Chesapeake blue-crab season in Maryland and I made sure to make the most of these 8-legged crustaceans while I was there. I also enjoyed raw oysters on the half-shell, served on ice with Old Bay seasoning and cocktail sauce. Crab cakes, corn on the cob, and some of my grandfathers favorite pecan pound cake, of which I promise to post a recipe later. While I’ll miss the Maryland seafood and my family and friends that still live there, I can’t let it get me down. There’s still at least a month of summer left, which means a lot of vegetables are still in season. Especially zucchini, squash and eggplant to name a few.

Therefore, this was a summer inspired recipe, flavored with the combined ingredients that one might normally expect to find in the traditional Italian dish ‘Puttanesca’ though I’ve chosen to leave out the tomatoes and anchovies, and substitute basil for the oregano, because I happen to have a lot growing in my herb garden.

I started by gathering the ingredients I’d need: 1 tablespoon of capers, 1 to 2 sweet onions (known as Vidalia onions where I’m from or ‘salatti sipulia’ here), several cloves of garlic, a deciliter or more of calamata olives, a little less than a deciliter of  lemon juice for some tang, some red pepper flakes for a little kick and olive oil for sauteing.  Don’t forget the eggplant. 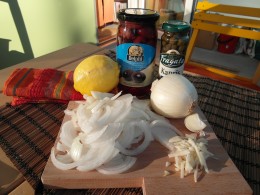 I cut the onions in halves and then sliced those, diced the garlic, and cut the calamata olives in halves as well. It saves a lot of time and frustration if you buy the olives in which the pit has already been removed.  Heat a little olive oil in a small pan and add the garlic and onions. Cook until soft and translucent and then add the lemon juice, capers and olive halves.  Then sprinkle on red pepper flakes in moderation according to your tolerance for spice. 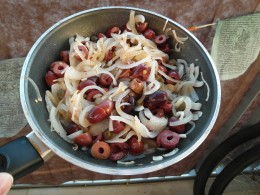 The next thing for you to do is to get the grill going. I grill as often as I can in the summer time because I love the flavor of the grill and the excuse to be outside as much as possible. There’s a technique to grilling that I haven’t quite mastered, but it’s called ‘patience’ and if you can get the fire going and wait for the coals to burn off the lighter fluid and turn into glowing embers, then that is the heat that will best cook your grilled food. 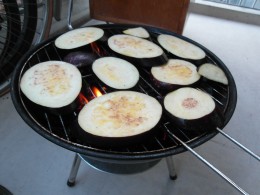 Brush both sides of the eggplant slices with olive oil first. That will ensure they don’t stick to the grill and they will get nice grill lines on them. About 4 minutes on each side is about sufficient to cook them through to perfection. Don’t worry about a little bit of charring, it will only add to the grilled summer flavor.

Finally, toss all the ingredients together, adding some chopped basil. For this, I used a sweeter, lighter in color, and less potent basil with a curly leaf, given to me by my friend Mari. It almost looks like lehti salatti, but it’s actually basil. 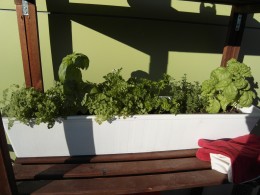 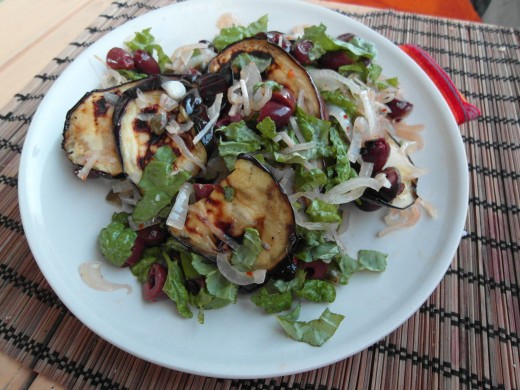 About this recipe: Inspired by a recipe in ‘The modern vegetarian kitchen’ by Peter Berley. Winner of both the James Beard Foundation and The IACP Cookbooks Award.

Serves: 4 as a side dish